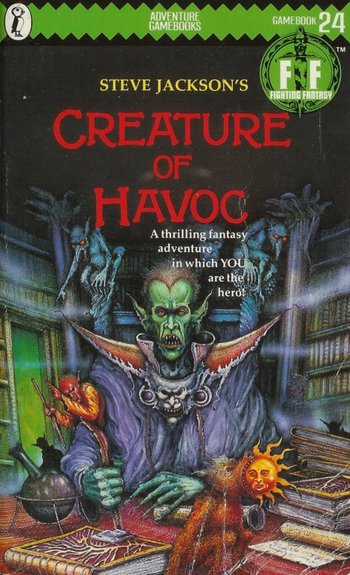 You will certainly go through a lot of havoc before you face this guy.
Advertisement:

Creature of Havoc is the 24th entry in the Fighting Fantasy line of Gamebooks. Written by Steve Jackson, co-founder of Fighting Fantasy with Ian Livingstone. It was his last book created for the series in its original run; his next entry in the series, Secrets of Salamonis, would be published 36 years later for the Scholastic era.

This book is unlike the others. While most of the gamebook entries have you as a regular human adventurer fighting monsters, in this story, YOU are a monster. A savage, barely-sentient monster who packs a powerful punch - he can instakill any enemy if he rolls a double - and starts without memories about who he is, what he is doing here. Stuck in a dungeon full of traps, other hostile monsters and adventurers ready to kill you without hesitation.

Creature of Havoc is known for its storyline, a deep backstory and an infamously difficult adventure.

Creature of Havoc provides examples of: