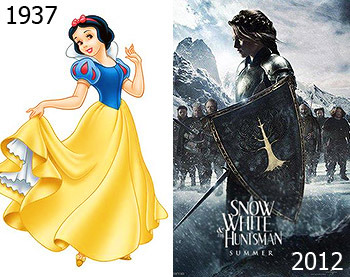 Left: Disney Princess. Right: Lady of War
"This woman - you know, with the long golden braids and a bullet helmet, armed with a huge sword - has arrived to challenge them. She is Freada, shield-maiden daughter of Hrothgar! Now, um, *ahem*, the daughter of Hrothgar is supposed to be Freawaru, which means 'peace weaver' — not 'beater of ass.'"
— SF Debris, "Heroes and Demons"
Advertisement:

The polar opposite of Chickification and a subtrope of Adaptational Badass. We all know girls will need role models, so what do you do when you're adapting or sequelizing a work from a "less enlightened" time? Make your female lead into an Action Girl!

The title comes from Xena: Warrior Princess, who is not an example but rather the inspiration, being something of a Trope Codifier for Action Girl. Xenafication thus can be defined as "becoming like Xena". Related to Took a Level in Badass and Adrenaline Makeover. Sometimes a specific form of Adaptational Badass. Not to be confused with Xenofiction. Often comes up by default in an Actionized Adaptation or Actionized Sequel. Compare with Real Women Don't Wear Dresses (which can occasionally crop up as a side effect of this trope).