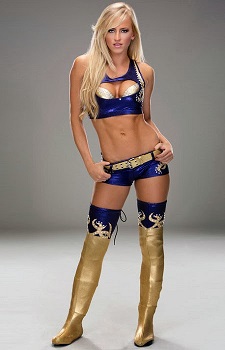 "Call to me, call to me..."
Danielle Louise Moinet (born 28 November 1983) is an American professional wrestler. She is best known for her time in WWE, where she performed on the main roster, and in its developmental territory NXT, under the ring name Summer Rae. She is a former football player in the Lingerie Bowl League. As of 2014 she was added to season 2 of the reality show Total Divas, but left the show in the third season.
Advertisement:

She was released from her contact on October 27, 2017, and currently works on the independent circuit.