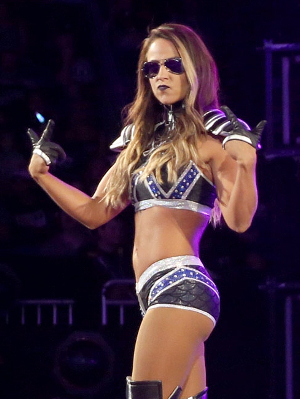 It's about EMMA.
Advertisement:

Tenille Averil Dashwood (born 1 March 1989) is an Australian professional wrestler who debuted for the Professional Wrestling Alliance in Melbourne as Valentine. After three years in Australia she would be invited to the USA to wrestle for SHIMMER, which she would do as Tenille Tayla. Tenille also went up North to Extreme Canadian Championship Wrestling and became a two time NWA SuperGirl's title holder. She also made stops in Manitoba's Steeltown Pro Wrestling and Wrestling Fan Xperience.

After concluding a tour with a different PWA in Canada, the Prairie Wrestling Alliance, Tenille signed to WWE, where she became known on its main roster and in its developmental territory NXT as Emma. She debuted on Raw in 2014 before returning to NXT in 2015. She later returned to Raw in 2016 but was abruptly released on October 29, 2017. After a tenure in Ring of Honor, she signed with Impact Wrestling until 2022; in both cases wrestling under her real name.

She made an unexpected return to WWE, answering Ronda Rousey's open challenge on October 28, 2022 episode on SmackDown, under her previous ring name.