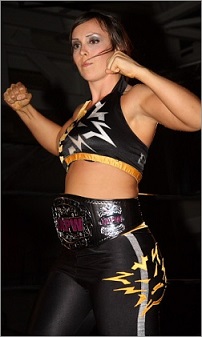 "All hail the Queen of Wrestling!"
Advertisement:

Sara Ann Amato (born November 13, 1980 in Martinez, California) is an American retired Professional Wrestler, manager and trainer who is better known as Sara Del Rey. She started as Nikki with All Pro Wrestling in Hayward in 2001, before going to work for the Japanese ARSION promotion. She worked for various promotions in the U.S., Mexico and in Japan, including appearing on the first ever SHIMMER show. Along with SHIMMER, she is best known for her work in Ring of Honor and CHIKARA. She has also competed for Wrestling Society X, All Japan Pro Wrestling, and did two house show (non-televised event) matches for TNA, one in 2009 and one in 2010. Among her in-ring achievements, she was an Impact Zone Wrestling Women's Champion, the first ever SHIMMER Champion

and Remix Pro Wrestling's first Women's Champion. She is considered one of the best wrestlers in the world today regardless of gender. In 2012, she became a trainer for WWE.