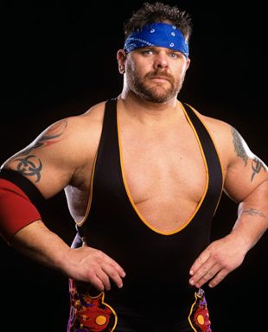 William Charles DeMott II (born November 10, 1966) is a retired American Professional Wrestler and trainer from Titusville, Florida best known for his work in WCW in the 1990s as Hugh Morrus. He started in 1990 as Sweet William working various independent promotions. He went to the AWF in Puerto Rico where he changed his name to Crash the Terminator. He would use this name in SMW, ECW, the hardcore promotion W*ING in Japan and elsewhere before arriving in WCW in 1995. He made some appearances as The Man of Question before he was introduced as Hugh Morrus in November 1995 as a member of the Dungeon of Doom. After the DOD was dissolved following "The Taskmaster" Kevin Sullivan losing his "Retirement Match" to Chris Benoit at WCW Bash at the Beach 97, Morrus stuck around in the midcard. He had the misfortune of being Goldberg's first TV opponent, on the September 22, 1997 WCW Monday Nitro, where Goldberg became the first wrestler to kick out of Morrus' No Laughing Matter moonsault en route to winning the match and kicking off what would later become known as "The Streak." Morrus reunited with his DOD allies Meng, The Barbarian and manager Jimmy Hart at the end of 1998 to form The First Family, which was stuck in the midcard before being dissolved following the arrival of Vince Russo. In Spring 2000, Morrus was renamed Hugh G. Rection, which was later changed to General Rection when he became the leader of Misfits In Action. During that run, he became a 2x WCW United States Heavyweight Champion

with Alex Wright. He went back to Morrus before the end of WCW. After WCW died, he was one of the wrestlers brought in for the InVasion/Alliance angle. He went back to his own name and became a color commentator for Velocity and a trainer for WWE Tough Enough and at WWE's short-lived developmental promotion Deep South Wrestling in Georgia. He later retired but has since returned to the independent scene.