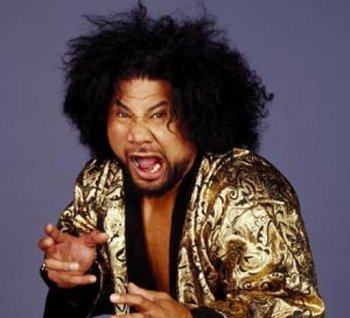 HEE-YUUUUUUUUUH!!!!
"There are 3 types of men: tough men, wrestler-tough men, and then there's Meng."
—Arn Anderson, Arn Anderson 4 Ever
Advertisement:

Tonga Uliuli Fifita (born February 3, 1959) is a semi-retired Tongan sumo and Professional Wrestler best known for his time in WWE from 1986-1992 as King Tonga and Haku or his time in WCW from 1994-2001 as Meng. After competing in sumo wrestling under the name Fukunoshima, he made his pro-wrestling debut for All Japan Pro Wrestling in 1978. He also worked as a referee for the Funk family's territory in Amarillo, Texas. As King Tonga, he first made his name in the International Wrestling promotion in Montreal, Quebec, Canada. He made his PPV debut as King Tonga in the battle royal that was part of the Chicago stage of WrestleMania II. He has competed for WWE, WCW, the AWA, New Japan Pro-Wrestling, CMLL, various National Wrestling Alliance territories, CHIKARA and many independent promotions around the world. Among his in-ring achievements, he is a former WWE World Tag Team Champion

. He is very well known among other wrestlers as being one of, and perhaps, the toughest man in American wrestling.

Not to be confused with those other guys called Haku, that other guy called Meng or with Ming the Merciless (although he can be pretty merciless).