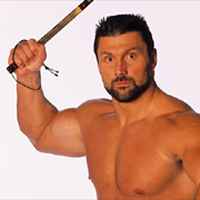 Steve Blackman (born September 28, 1963) is a retired American Professional Wrestler, martial artist and MMA trainer from Annville, PA who competed for WWE first as a Jobber in 1988 and then full-time from 1997-2002. He debuted in 1986 and first worked for Stampede Wrestling in Calgary. He made a surprise return/debut on the November 3, 1997 Raw, coming out of the crowd to rescue Vader from the Hart Foundation. His first match was as the replacement for the Patriot on Team USA (Vader/Goldust/"Marvelous" Marc Mero) against Team Canada (Davey Boy Smith/Jim "The Anvil" Neidhart/Doug Furnas/Phil LaFon) at Survivor Series 1997. Over the course of his WWE run, he would hold the WWE Hardcore Title

six times. He retired in 2002 after his contract ran out.

Not to be confused with Scary Black Man, although he was definitely scary to boot.