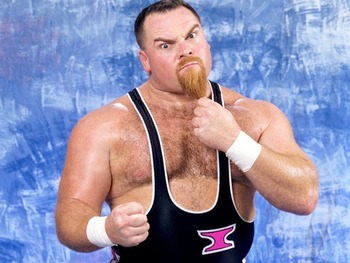 James Henry Neidhart (February 8, 1955 – August 13, 2018) was an American professional wrestler, best known for his time with the WWF, where he performed as Jim "The Anvil" Neidhart.

He got his start in the NFL, playing for the Oakland Raiders and Dallas Cowboys. After leaving football, he traveled to Calgary, and trained with Stu Hart to become a professional wrestler.

With his brother-in-law Bret Hart, they made up part of The Hart Foundation. He was also headliner for two of WWF's pay-per-view events: Survivor Series 1989 and In Your House 16: Canadian Stampede.

Through his marriage to Elizabeth Hart, one of Stu Hart's daughters, he is part of the Hart Family. The couple had three children, one of whom, Natalie, currently wrestles for WWE.

As for his in-ring achievements, he was a 2x WWE World Tag Team Champion

, he and The Blue Meanie were the inaugural MCW (Memphis) Southern Tag Team Champions

, he was a 1x TRCW (Manitoba) International Heavyweight Champion

, and he and Greg Valentine were 1x PWO (Ohio) Tag Team Champions