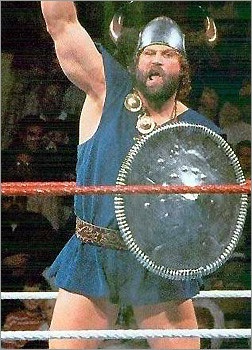 John Nord (born October 18, 1959) is a retired Americannote Depending on the source, he's either from St. Cloud, MN or Bozeman, MT professional wrestler best known for his time in the AWA as Nord the Barbarian in the mid-1980s and as The Berzerker in WWE from 1991-1993. He also competed for New Japan Pro-Wrestling, All Japan Pro Wrestling, WCW, World Class Championship Wrestling in Dallas, "Cowboy" Bill Watts' Mid-South Wrestling/Universal Wrestling Federation and other territories. He made his PPV debut at Survivor Series 1991 on Col. Mustafa (The Iron Sheik)'s team with Skinner (Steve Keirn) and Hercules in a losing effort against the team of "Hacksaw" Jim Duggan/Sgt. Slaughter/"The Texas Tornado" Kerry Von Erich/"El Matador" Tito Santana. While he never won a title in his career, he was named by Pro Wrestling Illustrated their "Rookie of the Year" for 1985, beating out Kendall Windham, Dan Spivey and Sam Houston (Jake "The Snake" Roberts's brother.)

He has nothing to do with that song from Clerks, the Science Fiction Literature series Berserker or the other wrestler called the Barbarian.