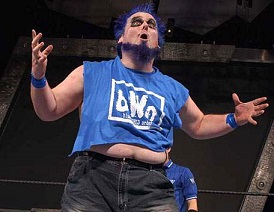 "Say hello to Da Blue Guy!"
"Meanie wins! Meanie wins! [Beat] Meanie wins? Well I saw it, I know I called it, I'm pretty sure we taped it, for the record, I don't believe it! Hey if SportsCenter doesn't air this, then ESPN can kiss my ass!"
—Joey Styles, ECW Ultimate Jeopardy 1997
Advertisement:

He started his career in March 1994 in the Midwest and Mid-Atlantic independents under such names as "Brian Rollins" and "The Zebra Kid". He debuted as The Blue Meanie, a reference to the Blue Meanies, the antagonists from the 1968 animated film Yellow Submarine, at ECW's November to Remember 1995 as a surprise partner to Stevie Richards. The tag team of Stevie and Meanie would specialize as Ditto Fighters, plundering and mocking the gimmicks of wrestlers both past and present.

In late 1998, Meanie would leave ECW for WWE and join Al Snow's group, The J.O.B. Squad, before going on to feud with (and later befriend) Goldust after the latter took umbrage at his parody of him, "Bluedust." He would return to ECW in late 1999, having lost much of his weight and renamed himself The Blue Boy.

He has since returned to the indies, with infrequent TV appearances on ECW's reunion shows.