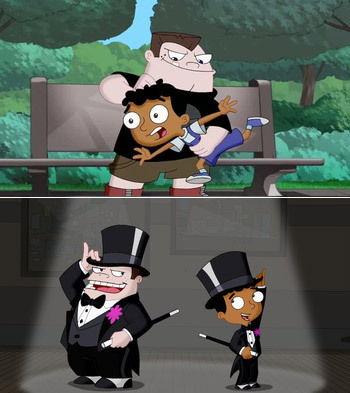 In fiction with child heroes, it's common to have a bully and his most frequent victim as supporting characters, typically as a Foil or Mirror Character. While the bully might feature as a villain, in stories where they are on the main characters' side, they are frequently paired up with the wimp as a sort of Big Guy, Little Guy double act. If the wimp isn't just weak, but also portrayed as smart, then can also cross over into Brains and Brawn, making use of the Brains Versus Brawn contrast.

Usually Played for Laughs: either the wimp is unhappy at being paired with the intimidating bully, the bully is unhappy that he's not allowed to beat on the wimp while they're supposed to be working together, or embarrassed to be seen with him, or the two get along surprisingly well considering their normal relationship. If the school works to make these characters get along, it becomes School Forced Us Together.

This can also be caused by a Bully Turned Buddy scenario, if the bully isn't entirely over their bullying ways and, this time, the bullying can be a form of Tough Love to make the Wimp stronger. If we get to see them as adults, they usually evolve into Sensitive Guy and Manly Man or even more often Vitriolic Best Buds, especially if neither of them will allow a third party to show the other up.

Almost Always Male, female-on-female examples are almost non-existent since this is based on physical strength and the visual of a larger and stronger character paired with a smaller and leaner character of the same sex, rather than psychology or relational aggression. However, you can find a female bully and a male victim as a subversion and often in a comedic tone. The other way around (i.e. male bully/female victim) is very rare and almost always Played for Drama, comedic examples being completely exceptional.

In a completely different kind of fiction, Seme/Uke pairings may feature this.