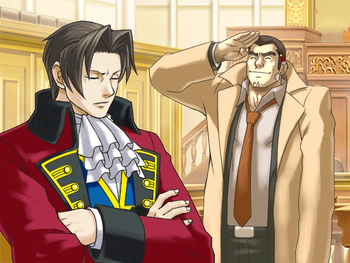 This is a type of ensemble in which the leader is strict and distant, whereas their immediate subordinate is easygoing and approachable. This dynamic can show up in the military, a business, or even a club. Part of the reason for this trope is that the leader, being the one who has to make tough decisions, is often hardened and might distance themselves from their men so they won't be as hurt by their loss. Meanwhile, the subordinate often has to interact with the men more often than their commander and will build a rapport with them.
Advertisement:

In this dynamic, the subordinate will often be A Father to His Men, The Social Expert, or The Face. In a villainous organization, the subordinate will be a Noble Top Enforcer or Affably Evil if their kindness is genuine. If not, they'll be Faux Affably Evil. If the leader becomes too strict or goes too far, expect the subordinate to stand up for the men. If the subordinate gets promoted to leader, they too might become hardened. Contrast with Captain Smooth and Sergeant Rough, where the commander is the more friendly one of the group. Compare to Talker and Doer. Super-Trope to Rude Hero, Nice Sidekick.