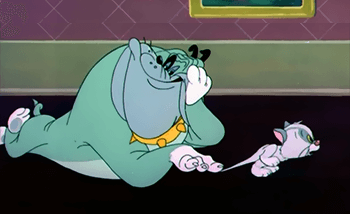 This trope is prevalent in (but not exclusive to) old cartoons from the 1940s as both Warner Bros. and MGM had a surfeit of bulldog characters. Generally they were vicious guard dogs or bullies, especially toward cats and smaller dogs.

Since a lot of the examples are in cartoons and because of the stubby snout and large jowls, the bulldog was probably used where they wanted what Preston Blair called the "Heavy Pugnacious Character". In many cases, the breed's characteristic features are exaggerated—for example, the lower teeth that protrude slightly from the mouth in many bulldogs may be depicted as full-on tusks like those of a pig.

Bulldogs being vicious and short-tempered is a Dead Horse Trope now since bulldogs were vicious many years ago when they were still bred to fight Brutish Bulls for sport, hence the name. When this sport was outlawed, bulldogs had their viciousness bred out of them so they could be kept as pets. It's reflected in fiction, too: Modern "mean dogs" are almost always Rottweilers, Pit Bull breeds, Chihuahuas, Doberman Pinschers, and German Shepherds.