Western Animation / The Big Bad Fox and Other Tales 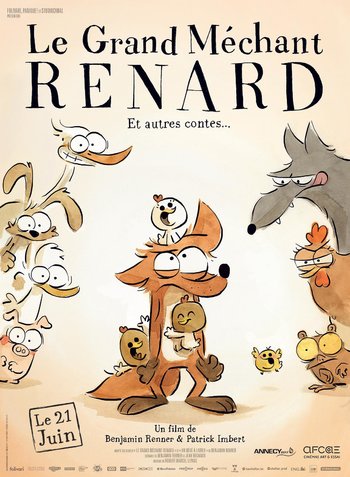 Le Grand méchant renard et autres contes (English: The Big Bad Fox and Other Tales) is a 2017 French animated film directed by Benjamin Renner (Ernest et Célestine), adapted from his comic book of the same name. As with Renner's previous film, it employs "tradigital" animation (each shot being drawn frame-by-frame in Adobe Flash) to emulate the look of traditional hand-drawn animation.

The film uses an anthology format, with a group of animals telling three different stories in the form of plays:

The film received critical acclaim and was commercially successful. It was licensed in the States by GKIDS and was given a British–English dub featuring well-known British talent, including Adrian Edmondson, Celia Imrie, Matthew Goode, Bill Bailey and Phil Jupitus.