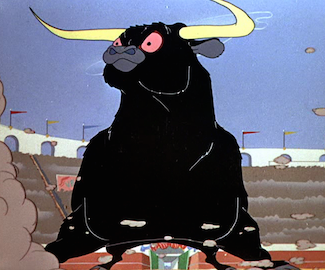 Generally speaking, bulls have a less-than-stellar reputation. They're territorial, protective of their herds and often easily provoked, and tend to react to perceived threats, rivals and irritations by means of a headlong charge to gore or trample the target of their frustration. This has resulted in fictional depictions of bulls almost always portraying them as violent, bad-tempered creatures that will gore or trample hapless targets at any provocation. They are also not likely to be terribly bright, even in worlds of Funny Animals and Intellectual Animals. The result is a standard portrayal of fictional bulls as dim-witted brutes with anger issues, easily riled but easily outwitted. Bulls are also one of the most likely types of herbivores to be portrayed as villains, in contrast to the usual depictions of carnivores and herbivores in media.

Note that this only usually applies to male cattle. Cows tend to be portrayed as much more friendly, easygoing and calm than their male counterparts, even though real cows can be just as aggressive and dangerous as bulls if provoked. It's also common for them to be depicted with a nose ring, because it makes them look tougher. (In real life, bovine nose rings are used mainly to encourage weaning of a calf, as they make it harder to suckle, thus discouraging the behavior. They may also be used to lead the animals along, although this isn't as common a practice as it used to be.)

Oftentimes, especially in cartoons and/or when in the context of bullfighting, these bulls will be depicted with solid black coats. These bulls will also usually sport large horns, and their victims will be subjects to Horn Attacks. A typical Bully Bulldog was used to counter the Brutish Bulls, before their "bully" traits were bred out.

This trope is evident even in more sympathetic portrayals of bulls; heroic bovines are often portrayed as still being gruff, short-tempered, blunt or harsh, often serving as The Big Guy and pairing this trope with Good Is Not Nice.

Since Tropes Are Flexible, other bovines such as buffalo, bison, yaks or fictional bull-like animals can also fill this role, as can brutish and aggressive characters or factions for whom the bull is a prominent Animal Motif.