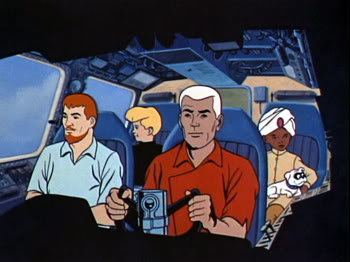 Front: Dr. Quest and Race (at the controls); back: Jonny, and Hadji; Bandit is in Hadji's lap.
Advertisement:

Doug Wildey created this beloved 1964 animated Adventure Series, the first produced by Hanna-Barbera and the first Animated Series made for television to use realistically drawn human characters in Science Fiction or adventure settings.

The series originally aired in prime time on ABC, which incidentally made it the first primetime animated drama in the world. Due to the expense of its (relatively) detailed designs and animation, as well as the network deciding to pit it against The Munsters so that it could salvage network darling The Flintstones, it was canceled after only one season. However, it became enduringly popular enough that all three networks reran it on Saturday mornings for well over a decade. It has also spawned several Sequel Series and Reboots.

A second Jonny Quest series was syndicated in 1986-87 as part of the second season of The Funtastic World of Hanna-Barbera, The New Adventures of Jonny Quest, with two new characters: Jessie Bradshaw, whose father was a colleague of Dr. Quest, and Hardrock, a man made of living stone. (It was accompanied by a Comic-Book Adaptation from Comico which was based on the original series and did not feature the new characters.) This series culminated in two made-for-TV movies - Jonny's Golden Quest and Jonny Quest vs. the Cyber Insects - which introduced Race Bannon's daughter, Jessie, (not the same character as Jessie Bradshaw), who would become a recurring character in subsequent incarnations.

Cartoon Network made some changes to the format when it debuted Jonny Quest: The Real Adventures (also known as The Real Adventures of Jonny Quest) in 1996. New characters included the recurring villains Jeremiah Surd and Ezekiel Rage, and the twin daughters of Dr. Zin. Also, the characters had access to Questworld, a virtual reality realm represented in most episodes by 3-D computer animation. According to this Wikipedia article,

development began in 1992, but the series went through three production teams over the next four years.

Warner Bros. announced a Live-Action Adaptation of Jonny Quest was announced in August 2007, with recent news placing Zac Efron as Jonny and The Rock as Race Bannon. However, that project lingered in Development Hell for years and was eventually canceled. In 2015 Warner announced they would be trying again with Robert Rodriguez directing and co-writing with Pirates of the Caribbean screenwriter Terry Rossio. In the meantime, 2015 saw the classic characters return in a DTV movie crossover with Tom and Jerry: Spy Quest. Jonny and his friends also became regulars in DC Comics's Future Quest, which put the stars of almost all of H-B's action cartoons from The '60s in the same Shared Universe. Also in 2015, the Quest team crossed over with the Scooby gang in the Scooby-Doo! Team-Up issue "Quest for Mystery!"

A major influence on The Venture Bros., to the point where a Writing Around Trademarks version of an adult Jonny is included in the series. See also "Toby Danger," an episode of Freakazoid! that was an elaborate Affectionate Parody.

Not to be confused with Johnny Test (though that show's title is certainly intended a play on this one).

The tiger ends up targeting and killing the guide instead.
Feedback

A short video featuring highlights of the most iconic machine in the "Jonny Quest" franchise.

A short video featuring highlights of the most iconic machine in the "Jonny Quest" franchise.