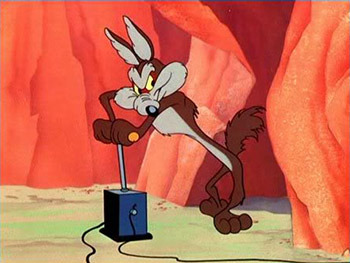 Acme detonators, for all your demolition needs.
Advertisement:

This detonator is usually a plain square box with a T-shaped plunger on top and wires attached. Although typically not seen anymore in Real Life, it is ubiquitous in classic Western Animation and is period-accurate in stories set between the late 19th and mid-20th centuries. In the real world these are actually called "blasting machines" because the plunger spins a little magneto similar to an old-fashioned hand-crank phone to generate the electricity used to detonate the explosives.

As often as not, a comedic character attempting to use it results in Where's the Kaboom? Alternatively, a comedic character may accidentally set it off early (or during the moment of relief after an explosive crisis has been averted) by absently sitting or leaning on the handle. Bonus points if the detonator actually explodes instead of the attached explosives. May be Played for Drama, as someone throws their body weight on the handle as a Last Breath Bullet.

Modern blasting devices use either hand crank or a twist handle instead of plunger to rotate the magneto to create the electric charge needed to detonate the blasting cap.

Compare Cartoon Bomb and Incredibly Obvious Bomb. Possibly related to Big Electric Switch, insofar as the obsolete look of the device is a deliberate choice of Rule of Cool over realism. Hair-Trigger Explosive doesn't need this to set it off. note But doesn't mean it can't be there. Even if it's never used. Weapon of choice for a Dastardly Whiplash. Notably, some satchel charges are actually triggered by detonators like these, at least when they aren't shot at or being triggered through a wick and trigger system.