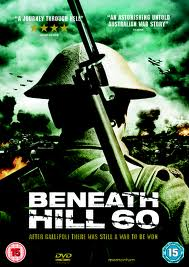 Beneath Hill 60 is a 2010 Australian war film about the Trench War. In 1916 the Australian mining engineer Oliver Woodward enlists in the army and is affected as new officer of a mining section, in the Western European trenches. Their mission is to dig under German trenches in order to set a powerful explosive device.