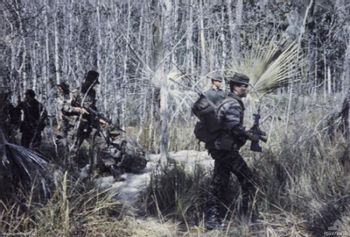 So badass they even have their own SAS regiment.
"I cannot surrender. I am in command of Australians who would cut my throat if I did."
— British Colonel Charles Hore, Battle of Elands River, Second Boer War
Advertisement:

is Australia's military. At about 100,000 personnel (full-time and reservists), it is the largest military in Oceania note  That is to say, it's larger than the tiny militaries of New Zealand and Fiji, and the near non-existent militaries of Papua New Guinea and small island nations such as Tonga, but still smaller than most of the Asian military forces.

It makes up for this in being rather technologically sophisticated and more highly trained than most conventional forces... in addition to not pissing off anyone so badly they end up fighting another army. It also comes from a land that is situated rather inconveniently for invasion.

If you want to tell an Australian soldier at a glance in most media depictions, look at their head gear. Namely, if they are jauntily wearing a wide brim 'slouch' hat, maybe with one side of the brim neatly pinned up, they're a 'Digger'; an Aussie soldier (i.e. not Air Force or Navy). Similarly, for many years, the Aussie "jellybean" camouflage colour scheme was instantly recognisable once you knew what to look fornote there was the standard forest pattern, along with a desert pattern

◊, and a grey naval pattern

that serves no real camouflaging purpose—it's more because wearing a one-piece grey coverall (the previous uniform) is torturous when you're working in the bowels of a ship in the tropics, although that's now been replaced by a domestic variant of the Multi-Cam pattern.

Without getting into too much detail, the Australian Defence Force (ADF) generally refers to the uniformed services which makes up half of the Australian Defence Organisation; the other half being the Department of Defence which provides the bureaucratic backbone. Besides the Governor-General (representing the reigning British monarch who is ultimately Australia's head of state and commander-in-chief) and the Australian government; the professional head of the ADF is the Chief of the Defence Force (4 stars). Under that are the Vice Chief of the Defence Force, service heads (Army, Navy and Air Force), Chief of Joint Operations and Chief of Joint Capabilities (all 3 stars).

Australian Army Affectionately known as "Diggers" from their experiences at Gallipoli during World War One. Like Canada, it was mostly British garrisons which defended Australia during its colonial era alongside locally raised militias, some of which ended up serving abroad in New Zealand, Crimea and Sudan. The historiography of Australia's own frontier conflict is controversial. Eventually Britain withdrew its troops in the mid 19th century; leading the pre-Federation colonies to raise professional forces under the tutelage of British officers. By the time of theSecond Boer War and the Boxer Rebellion, the Australian colonial governments sent their own regular contingents to support the British. Once Federation occurred in 1901, the colonial forces amalgamated into the first true Australian army.

In recent years, the Army made global headlines for its strong sense of accountability and the direct manner it addresses scandals. For instance, in response to serious allegations of sexism, Lieutenant General David Morrison released a video bluntly telling soldiers to get out if they didn't want to treat all colleagues equally. When war crime accusations from the War on Terror became public, a lengthy investigation took place and concluded with recommendations for criminal prosecution and an entire unit being struck from the Order of Battle so there'd be a noticeable gap in records and people would know the shame that occurred. After further inquiries, it was found that there was insufficient evidence for the accusations to be referred to investigators and the soldiers in question were officially cleared of any wrongdoing and given a public apology by the Defence Minister. The whole (questionable) process, however, has caused fractures in the confidence of line troops (especially the Special Forces) in the capability of the current military leadership, the effects of which have included a significant number of special forces reportedly contemplating retirement from military service.

Royal Australian Air Force Referred to as the "R Double-A F", for years made do with small numbers and outdated equipment. For a while, it was the world's only operator of the F-111 Aardvark years after the US Air Force retired it. The bulk of its fleet is currently made up of aging F/A-18 Hornets, supplemented by a number of secondhand Super Hornets purchased as a stopgap due to delays with the F-35. In 2014, the RAAF finally began fielding the F-35A variant, with plans to eventually field at least 100 of the fighters. As of 2021, the replace of legacy FA-18A/B models by the F-35A is well underway with approximately half the fleet replaced. This is supplemented by the FA-18F Super Hornets and EA-18G Prowlers already in service.

As noted in the above picture, the Australian Defence Force has its own SAS regiment (called the SASR

) who are every bit as badass as the original SAS, if not more so (the Viet Cong nicknamed them "The Phantoms Of The Jungle" for a reason: the service record of the Australian and New Zealand SAS regiments during Vietnam was, at minimum, 492 Viet Cong killed...with 5 SAS troopers lost, 3 of whom were to friendly fire). Also within the Special Forces community are Commandos

(kinda like Navy SEALs who also do underwater repairs), the 171st Aviation Squadron (who provide helicopter mobility and tactical transport in a similar manner to the American 160th SOAR

), and the Incident Response Regiment

Australian troops fought under the British flag in several 19th century conflicts back when Australia was still a collection of British colonies, including the Maori Wars in New Zealand, Sudan in the 1880s, the Boer War in South Africa and Boxer Rebellion in China during the late 1800s (both of which continued into the early 1900s, making them the first foreign wars in which Australian citizens fought).

Australian forces were involved in both World Wars on the Triple Entente side in World War I and the Allied side in World War II. Their most famous campaign of World War I was the failed Gallipoli Campaign in Turkey, although they also served on the Western Front in France and fought in the Middle East campaigns. Australia would later adopt the day of the Gallipoli landings (April 25) as their national day of remembrance, despite being a complete failure. In fact, the importance of ANZAC Day has risen to the point where it is the unofficial national holiday — Australia Day is generally seen as a time to have barbecues, watch fireworks, and watch cricket. In World War II they were deployed to North Africa (most famously as the "Rats of Tobruk") and later, Australian soil was directly threatened, necessitating the creation of militia who earned distinction in the Kokoda campaign, where 200 Aussie militia held back 1200 Japanese along an extremely muddy and long trail in Papua New Guinea.

The Australians were also involved in the Korean War and The Vietnam War (where they scared the Viet Cong and NVA shitless as they used the exact same guerrilla tactics, were so smart they avoided ambushes and traps and were very patient, persistent and stubborn), as well as the Malayan Emergency, the Gulf War, the American occupation of Afghanistan, and the Iraq War. They've also participated in UN peacekeeping pretty much everywhere you can think of, although rarely in large numbers (with the notable exception of East Timor, where they were instrumental in ending the Indonesian occupation and stabilisng the country). During the Cold War, the Ikara anti-submarine missile

was developed and built in Australia for the RAN.

Somewhat amusingly, at least to some Australians, there have been claims circulating for quite some time that in the event of an invasion, the Australian Defense Force would only attempt to defend a relatively tiny portion of the country including Sydney, Canberra and Melbourne. Some older North Queenslanders still express bitterness over the WW2 'Brisbane Line' plan, which would have ceded their region (much of the northeastern quadrant of the country) to the Japanese in the event of invasion — it remains a parochial symbol of "big city" Brisbaneites neglecting their northern brethren. (Meanwhile, the north-west of Australia, which is probably the most vulnerable to invasion due to the terrain and ideal beaches for landing an army, totals an area of 1,600,000 square kilometres, and is defended by a single regiment — sacrificing the north or the far west to buy time may be the 'least worst' option under grim hypothetical circumstances.)

The Australian military in fiction

The Australian military in music