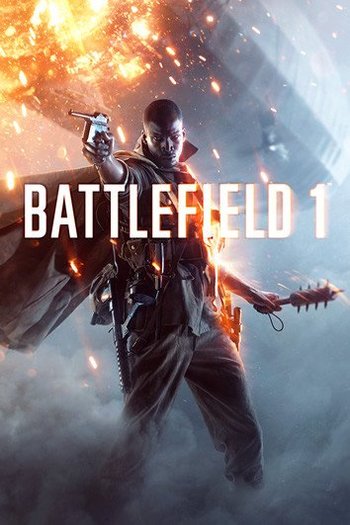 Experience the dawn of all-out war.
Battlefield 1 is based upon events that unfolded over one hundred years ago.
More than 60 million soldiers fought in 'The War to End All Wars'.
It ended nothing, yet it changed the world forever.
What follows is frontline combat.
You are not expected to survive.
— Opening text of "Storm of Steel"
Advertisement:

Battlefield 1 is a First-Person Shooter in DICE's Battlefield series. Unlike what the title number implies, it is not the first game in the series (that would be Battlefield 1942). It is instead the fifteenth overall installment and the next game in the main series after Battlefield 4.

The game set in World War I (hence the jarring change in the title number). The game was released on Windows, Playstation 4 and Xbox One on October 21, 2016, with an "Early Enlister Edition" dropping three days beforehand on October 18.

Four DLCs were announced: They Shall Not Pass, In the Name of the Tsar, Turning Tides, and Apocalypse. Like previous games, each DLC features new weapons, new maps and operations, and new game modes. Premium season pass holders receive access to them two weeks early, and can have earlier access to their contents in the Premium-only Community Test Environment.

The first DLC, They Shall Not Pass, was released on March 14, 2017. The DLC focuses on the French Army and their battles in World War I, including the infamous Battle of Verdun itself.

The third DLC, Turning Tides, focuses on naval engagements during World War I, and was released in two parts in late 2017 and early 2018.

The fourth and final DLC, Apocalypse was released on February 20th, 2018. It focuses on some of the most notorious and bloody battles waged during the Great War; The Battle of The Somme, the Battle of Passchendaele, Battle of Caporetto, a German air raid conducted over the city of London and aerial dogfights waged over The Alps.

Tropes that apply to Battlefield 1: