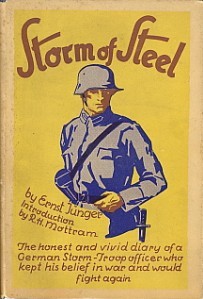 Storm of Steel (German title: In Stahlgewittern) is the World War I era memoirs of Imperial German soldier Ernst Jünger. It details Jünger's experiences fighting on the Western Front and gives detailed accounts of life in a time when trench warfare was common. Adapted from Jünger's wartime diaries, it begins with him arriving on the battlefield and ends with him being awarded the coveted Pour le Mérite (also known as the Blue Max). Along the way, he both wins and loses many battles, gains and loses friends, finds respect for his enemies, and very nearly loses his brother to enemy fire. The book was published in 1920 and has been translated into English numerous times.

Tropes used in this memoir: