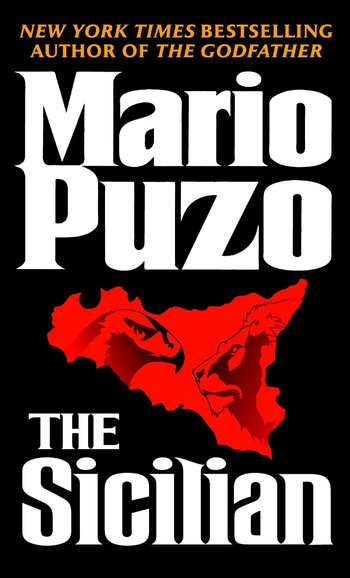 "Ah, we love where we are born, we Sicilians, but Sicily does not love us."
"Live your life not to be a hero, but to remain alive. With time, heroes seem a little foolish."
— Don Vito Corleone
Advertisement:

The Sicilian is a 1984 novel by Italian-American author Mario Puzo. It is the literary sequel to The Godfather. Set in 1940s and 1950s Sicily, the novel follows Salvatore "Turi" Guiliano, a Robin Hood style bandit who dreams of freeing Sicily from the corrupt government and The Mafia, with the help of his second in command and best friend, Gaspare "Aspanu" Pisciotta. The novel is based on the real life Sicilian bandit Salvatore Giuliano. (Yes, all Puzo did was move the "i" around.) To save Guiliano's life, Michael Corleone is ordered by his father, Don Vito Corleone, to take Guiliano with him as he returns to the United States after his exile in Sicily.

It was adapted into a film in 1987 that was directed by Michael Cimino and starred Christopher Lambert as Guiliano, John Turturro as Pisciotta and Joss Ackland as Don Croce. However, all Godfather references and characters were removed from the film due to Paramount Pictures owning the copyright.

See also Salvatore Giuliano, an Italian-language biopic of the bandit.

The Sicilian provides examples of the following tropes: