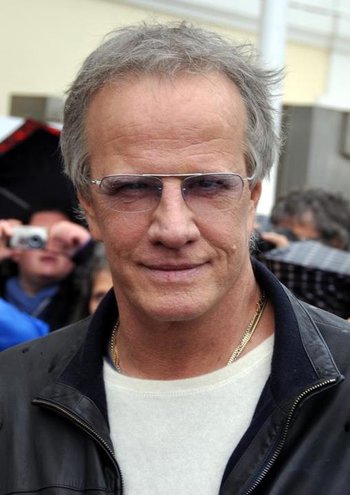 Christophe Guy Denis Lambert (born March 29, 1957), known professionally as Christopher Lambert, is an unlikely action star and French actor, novelist, and producer from...Great Neck, New York? Like his best-known character, he's from "lots of different places": his father was a UN diplomat. He has since starred in numerous fantasy, sci-fi, and thriller movies.

In the U.S., he is best-known for his raspy voice and chuckle (Ah! Ah! Ah! ....Sorry.) His other strength is his eyes; Lambert was often praised by critics for doing 'more with less' doing his close-ups.

Lambert's breakout role was as Tarzan in Greystoke: The Legend of Tarzan, Lord of the Apes. His most famous role is the immortal Scottish samurai Connor McLeod from the Highlander franchise. The cheesy '86 original came and went in theaters, but it found life on VHS thanks to its strong performances from Lambert, Sean Connery and Clancy Brown (not to mention the stylish direction of Russel Mulcahy, which Lambert is always quick to credit). Lambert wasn't as fluent in English back then, so he had to rely on his own aloof charm and reading all of his lines phonetically. His notoriously-poor eyesight was mitigated by Lambert doing all of his own stunts. His fight scenes had to be heavily-choreographed (moreso than usual) to avoid injury.

He reportedly wasn't as enthusiastic about Highlander sequels and spin-offs, having been burned by Highlander 2 (he tried to get Clancy Brown back, but that fridge-sized man thought the script was shite and had other fish to fry). Still, he endorsed the Highlander TV series and showed up again in the pilot, along with starring in one of the theatrical releases based on that show.

Apart from Highlander and Mortal Kombat (and some cameos in action comedies), he has mainly made B-movies. Nevertheless, he cultivated a rep for being a 'thinking man's' action hero who rises above the material.

Lambert also did a big favor for the production crew of the first MK film by flying out to location in Thailand on his own dime because the budget couldn't afford for him to be there and he wanted the film to succeed. Fun fact: Raiden was meant to be played a bit more serious in the original film, but the filmmakers loved Lambert so much they kept his ad-libs and joking around in the film, even encouraging him to goof off a bit more. He later sat out Mortal Kombat: Annihilation. Bullet dodged by Chris Lambert, but his absence was keenly-felt. A quarter-century later, he lent his voice and likeness to Mortal Kombat 11 as part of the movie skin pack.

Of course, he has done a variety of different stuff in his native tongue, usually romances. The thing which attracted him most to the Connor character was the romantic element.

He was married to Diane Lane for six years and Sophie Marceau for two years.

Works featuring this actor, that don't have pages of their own provide examples of: