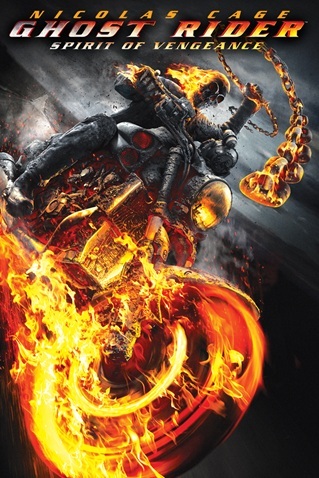 "It doesn't matter how far you run, there are some demons you just can't escape. My name is Johnny Blaze."
See, you're a baaaad man! And this thing, the Rider, he feeds on bad men. And he's hungry, he's hungrier than he's been in years, and THAT'S why I'm shaking. 'Cuz right now, the only thing standing between you and the Rider is me, and he's just—he's—... SCRAPING... AT... THE DOOR. SCRAPING AT THE DOOOOOOORR!!
— John Blaze
Advertisement:

Spirit of Vengeance is the sequel to 2007's Ghost Rider, released in 2012 and starring Nicolas Cage in the title role once again.

Struggling to control Ghost Rider, John Blaze has moved to Europe. He is contacted by a Christian order to find and protect a boy named Danny from the Devil himself, and in return he gets to rid himself of the Rider.