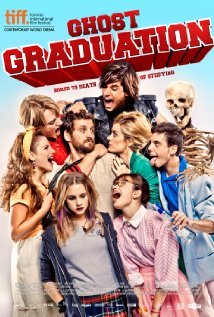 Jorge: [about Modesto] Why isn't he scared?
Mariví: He probably came from a public school.
Advertisement:

Modesto can see dead people - sadly this problem causes him a lot of trouble in life, as he's lost his teaching job at seven schools. Then he gets a job at a school haunted by five students with Unfinished Business. Pinfloy, Ángela, Mariví, Dani, and Jorge all died in a library fire 20 years ago and need to graduate high school to move on.

In late 2015 it was made avalable on Netflix with subtitles.