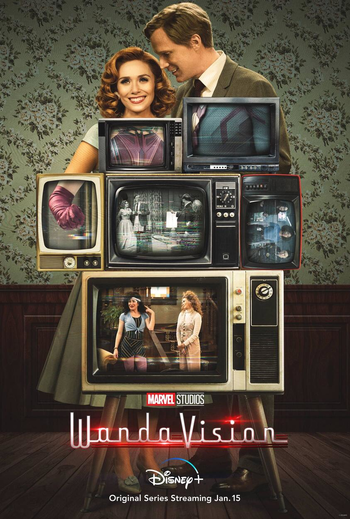 A visionary new age of television.
Jimmy Woo: So you're saying the universe created a sitcom starring two Avengers?
Darcy Lewis: It's a working theory.
Advertisement:

WandaVision is a miniseries of many genresnote romantic superhero Science Fiction/science fantasy mystery psychological/surreal horror action thriller dramedy with a sitcom pastiche theme, to be specific created by Jac Schaeffer, directed by Matt Shakman (himself a child actor from '80s sitcom Just the Ten of Us), and executive-produced by Kevin Feige, based on the Marvel Comics characters Scarlet Witch and The Vision. It is the 24th official installment of the Marvel Cinematic Universe, the first installment of Phase 4 and the Multiverse Saga, and the first TV series both set in the MCU and developed by Marvel Studios themselves for Disney+.

Set in the immediate aftermath of Avengers: Endgame, Wanda Maximoff (Elizabeth Olsen) finds herself in an alternate reality in which her lover Vision (Paul Bettany) is inexplicably alive once more. The two are soon Happily Married as they adjust to a new life seemingly devoid of superheroics in the idyllic, sitcom-esque town of Westview, New Jersey... but something's not right. It quickly becomes apparent that things are not as they seem in their Stepford Suburbia, and as new problems arise while S.W.O.R.D. agents attempt to make their way into the neighborhood, the two eventually discover something disturbing at the heart of their new life....

The series is described as being a send-up of (or tribute to) classic TV sitcoms such as The Dick Van Dyke Show, Bewitched, The Brady Bunch, Family Ties, Malcolm in the Middle, and Modern Family, with a bit of a Surreal Horror twist (Shakman compared it to Get Out; the works of David Lynch — particularly Blue Velvet and Twin Peaks — have also been brought up as a point of reference by quite a few critics). The storyline is also influenced by House of M, The Vision, and — naturally — The Vision and the Scarlet Witch. Recurring MCU figures who also appear in the series include Jimmy Woo (Randall Park), Darcy Lewis (Kat Dennings), and Monica Rambeau (now an adult, portrayed by Teyonah Parris), while Kathryn Hahn appears as Wanda and Vision's "nosy neighbor", Agnes.

As mentioned above, WandaVision is one of the first live-action series created by Marvel Studios that will tie directly into the theatrical movies, affecting the MCU in greater ways than before, unlike the previous series produced by the now-defunct Marvel Television which only had minor influences, or were following after film events.

The show made its debut on Disney+ on January 15, 2021, airing for nine episodes total through March 5. Additionally, the series is being treated as the first part of a spiritual tetralogy with Loki, Spider-Man: No Way Home and Doctor Strange in the Multiverse of Madness, the latter of which continues Wanda's story from this series. In October 2021, it was reported that a spinoff series was in development

, with Hahn set to reprise her role, and Schaeffer back as writer/executive producer. The series was then confirmed by Disney the following month. The series, Agatha: Coven of Chaos, is set to come out late 2023.

"What is a plot, if not tropes persevering?"

WandaVision is, on the surface, a throwback to classic TV sitcoms (including The Dick Van Dyke Show, The Brady Bunch, and Full House). However, it's obvious that something is not quite right about Westview, and elements of Psychological Horror, Surreal Horror, and Paranoia Fuel only become more prominent as the series continues.

WandaVision is, on the surface, a throwback to classic TV sitcoms (including The Dick Van Dyke Show, The Brady Bunch, and Full House). However, it's obvious that something is not quite right about Westview, and elements of Psychological Horror, Surreal Horror, and Paranoia Fuel only become more prominent as the series continues.