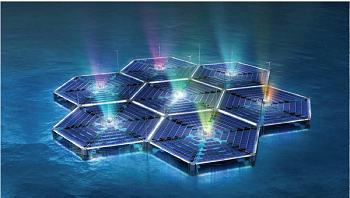 There's something about hexagons which make them look inherently advanced. This makes sense, since they're stylish yet practical. They slot together like squares, but look more complicated despite being more efficient to build with (a hexagon has a greater area for the length of its sides than a square, hence why bees use hexagonal honeycombs for storage). Board games, especially wargames, often use hexagons instead of squares because it allowed for clearly laid out movement in six directions without "diagonal" movement across corners. Not to mention even the name Hexagon sounds futuristic.

Honeybees and their hexagonal construction projects may be the cause of the hexagon's aesthetic appeal to mean "alien civilization", but this trope is also justified by the hexagon's efficiency and versatility in nature, science and engineering, much like smooth sleek curves and solid, practical looking blocks. Carbon, which possesses 6 electrons forming hexagonal atomic bonds, and today the basis for modern polymers, semiconductors and the molecular structure of every single living thing in existence, is naturally inclined to form hexagonal molecules due to the way it bonds, and it is this structure that gives diamond and other carbon allotropes their strength.note Graphite being the odd one out, since it's made up of covalently bonded "sheets" of such molecules which slide over one another. In engineering the hexagon finds usefulness in dome structures (since they're much easier to produce a curve with than squares), solar panels (which benefit from the aforementioned area-to-edge ratio) and hexagonal floor tiles (which look cooler than boring old rectangles).

Compare Everything Is an iPod in the Future and Our Weapons Will Be Boxy in the Future. Contrast Zeerust (which this trope may well become when Science Marches On). See also: The Aesthetics of Technology.

Discussed in "Hexagons are the Bestagons".

Discussed in "Hexagons are the Bestagons".