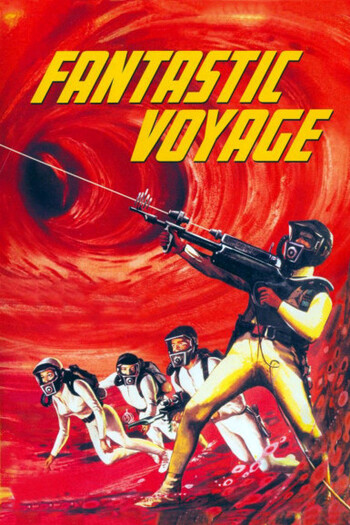 A 1966 Science Fiction film, directed by Richard Fleischer and starring Stephen Boyd, Raquel Welch, Edmond O'Brien, and Donald Pleasence, about a shrinking machine used to send a mini submarine and its crew inside the body of a defecting scientist.

During the Cold War, both the United States and "The Other Side" have discovered the shrinking technology, which is limited in practicality because of how short-lived the effect is. But the scientist Jan Benes (Jean Del Val) had discovered how to overcome the limit, and enemy agents will stop at nothing to prevent the secret from escaping from behind the Iron Curtain. Benes, wounded in an attack, is comatose and dying from a externally inoperable bloodclot, so the U.S. miniaturization taskforce organizes an expedition to be shrunken to remove the clot from the inside, operating on it at the cellular level.

But for the same reason they need to save the scientist, they have a time limit to get out of the body (or they'll grow back to normal size while inside of it). Even further, an enemy agent is trying to stop them; the protagonist Charles Grant (Boyd), who smuggled the scientist from behind the Iron Curtain, has to make sure the mission succeeds while not knowing who he can trust on the crew.