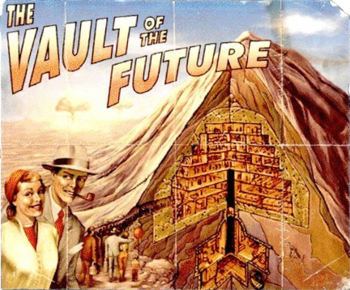 Fallout is a series of pulp Science Fiction Western RPGs, originally owned and published by Interplay and Black Isle and currently owned by Bethesda. Right after The Elder Scrolls, it is the longest-running and best-selling single player WRPG series in history, with over 50 million game copies sold since the series began in 1997.note The first two games each sold around 600,000

, respectively. Fallout 4 is estimated to have sold over

. Fallout 76 seems to have sold at least 5 million copies

based on statements made by Bethesda regarding its sales relative to Fallout 4. The games involve adventures in the post-apocalyptic United States of a retro-futuristic Alternate History — a Crapsaccharine World that never quite got over The '50s, powered by Atomic Energy and filled with Moral Myopia.

After World War II, the United States became an okay place to live. The shift towards nuclear energy gave way to technological wonders previously relegated to science fiction, from robot butlers to wrist-mounted computers. Unfortunately, the good times would not last: this inefficient technology depleted fossil fuels even faster than in the real world, causing massive "resource wars" in the early-mid 21st century. In 2066, China and the United States clashed over the Alaskan oil fields, leading to an 11 year military conflict between the two superpowers... then, on October 23, 2077, somebody - nobody is entirely sure who - ordered a nuclear launch. And once one missile was fired, everyone else responded in kind.

The resulting "Great War" lasted a mere two hours, but the atomic fire that burned the world was so incredibly destructive that it caused the total collapse of global civilization. Across the United States, pockets of humanity survived the bombs, either on the surface, in personal shelters, or by hiding in the Vaults: massive underground bunkers built by the Vault-Tec Corporation. But while the Vaults were ostensibly meant to protect America's people from nuclear armageddon, in reality the project doubled as an unethical, government-sponsored research program, with most Vaults' inhabitants living in conditions ranging anywhere from "somewhat unusual" to "outright torturous", all as part of a demented "social experiment" of unknown purpose.

The first Fallout game begins almost a century later, in 2161. Though the survivors in the United States have slowly begun to rebuild with small-scale societies, civilization as a whole struggles to survive amidst scarce resources, vicious mutants, and those who have turned to a Rape, Pillage, and Burn lifestyle. Subsequent games are set successive decades after the first, with the world continuing to evolve with new factions and adventures. There are two coherent story arcs and settings in the main series:

The series began life as a planned sequel or spinoff to the 1988 cRPG Wasteland, but due to licensing issues was retooled into a Spiritual Successor (the Wasteland series would later be revived by inXile Entertainment). As such, the Interplay/Black Isle games followed in Wasteland's footsteps with turn-based combat and 2D graphics, using an isometric perspective. After Bethesda acquired the franchise, the games underwent a Genre Shift to 3D first/third-person shooters with real-time combat, similar to their famed Elder Scrolls series. The original Interplay-era games were notable early examples of open-world Western RPGs, and the later Bethesda installments helped codify the modern Action RPG/Wide-Open Sandbox hybrid.

The games utilize a patented stat and character system known as SPECIAL — players put points into Strength, Perception, Endurance, Charisma, Intelligence, Agility, and Luck, which affect their "derived statistics" (health, action points, damage resistance, etc.) and their starting skill levels, and every few levels (or every level, depending on the game) the player chooses from a list of "perks" that give special bonuses, with certain builds unlocking certain perks.note While the system remained more or less intact through every game until New Vegas, Fallout 4 and 76 heavily streamlined it, removing skills entirely and transferring their functionality to the perk system. This change saw some degree of backlash, and time will tell if it remains in future entries. From there, the player is let loose into the open world with a simple, often vague starting objective and little in the way of equipment and supplies. While the first game made the main story objectives Timed Missions, subsequent games ditched it entirely, encouraging the player to explore the world at their leisure.

The first few entries also spawned a pair of "sister games" that utilized similar gameplay and design philosophies: Arcanum: Of Steamworks & Magick Obscura, a Steampunk fantasy game by former Interplay and Black Isle developers, and Lionheart: Legacy of the Crusader, a historical fantasy game published by Black Isle and developed by Avalon Interactive, which serves as the only non-Fallout videogame to use the series' patented "SPECIAL" character system.

If you're looking for radioactive fallout see Nuclear Weapons. The series is not to be confused with Mission: Impossible – Fallout.

Note: Tropes relating to the series and the Fallout Universe in general goes here. Please put tropes that applies to individual games in the series on their respective pages.

The opening narration to Fallout 3.

The opening narration to Fallout 3.