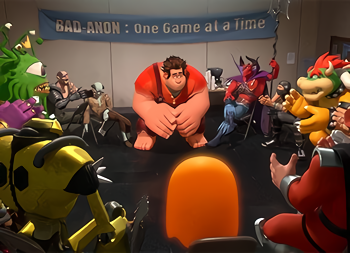 So you have a setting where non-human beings exist, and their nature makes living among humans difficult. Maybe they suffer from a Horror Hunger, live forever (and it sucks), have customs that don't endear them to locals (such as rampant kleptomania and throwing around Curses like it's going out of style) and/or the stress of keeping up the Masquerade is just brutal. Well, there's a support group of reformed/reforming monsters that is out to help those among them who want to live closer to humanity. Possibly even to regain some of that humanity if they were human once. They may even help convince a newly turned member he isn't human at all.

The status of this group in monster society can vary. They may be a bunch of Defectors From Decadence and Pro Human Transhumans who are actively hated by their society at large, a fairly neutrally viewed group, or they may even be top dogs and are enforcing the Masquerade via these groups as a form of positive self-policing (with another group in charge of chasing down those who "relapse"). You often get groups of Friendly Neighborhood Vampires forming these kinds of groups, though a group of Fully Embraced Fiends may form such a group to help fledgling Vampire Refugees adjust without going all Hunter of His Own Kind.

They'll typically help each other deal with mundane and magical matters, like how to ensure their Undead Tax Exemption, keep their Horror Hunger at bay, mask the smell of brimstone/rotting flesh, how to fool human social customs, etc. That said, it's also possible for these groups to focus on blending in not for humane reasons (no pun intended), but to better prey on humans, in which case "disposing of bodies" is usually also on the list of things they help each other do.

This trope is usually at the "acceptance" phase in the Stages of Monster Grief.