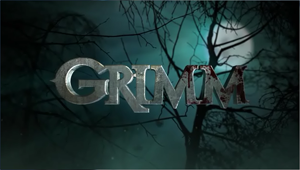 Exactly what it says, folks.
Advertisement:

Grimm is a detective series with significant Fantasy and Horror elements. It premiered in October 2011.

Nick Burkhardt, a new on the beat homicide police detective with the Portland Police Bureau in Oregon, is about to propose to the woman of his dreams. He comes home to discover his Aunt Marie has turned up unexpectedly. They take a walk and she hits him with the truth she's been keeping secret from him: he is one of the last descendants of the Grimm family — as in The Brothers Grimm — and as such, is gifted with the ability to see monsters, or "Wesen", walking among us, and that his family has hunted and slain these monsters for generations.

Now Nick must cope with his new abilities, the knowledge that comes with them, and still do his job as a police officer.

Over the course of the first season, the series has moved away from Monsters of the Week and Police Procedural elements wrapped up in self-contained episodes into a more of a ongoing drama with various subplots all running concurrently that happens to be centered around police work and Wesen life. At the same time, the show has branched off from focusing on Nick as the central character into more of a ensemble feel by giving other characters more screen time and involvement in various plots. Not a surprising development, since the show was co-created by two alumni of influential and famously Myth Arc- and ensemble-heavy Urban Fantasy Angel.

There was a web series to hold fans over during the off season (winter hiatus 2012-2013). They deal with the misadventures of Monroe helping Rosalee in the spice shop. Another web series was posted between Season 2 and Season 3 showing Bud the Eisbiber having to deal with a problem of his own. A third web series set around Valentine's Day 2014 shows Juliette and Rosalee dealing with a Ziegevolk.

Three novels based on the series were released The Icy Touch by John Shirley, The Chopping Block by John Passarella and The Killing Time by Tim Waggoner.

A companion book called Aunt Marie's Book of Lore written from an In-Universe perspective was released in 2013.

Not to be confused with American McGee's Grimm.

Thanks for not killing us harmless tropers, Grimm! Have a fruit basket.