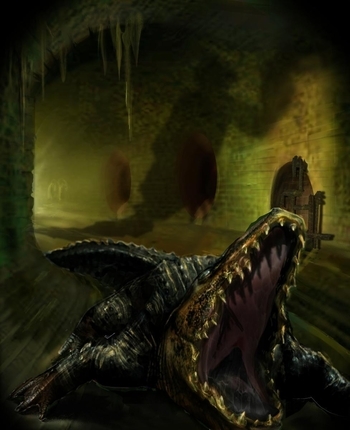 Dean: An alligator in the sewer. Come on.
Sam: What? Well, Dean, it's a classic urban legend. A kid flushes a baby gator down the toilet, and it grows huge in the tunnels.
Dean: But no-one's ever really found one. I mean, th—they're not real.
— Supernatural, "Tall Tales"
Advertisement:

Alligators that have been flushed down the toilet will end up living in the sewers down below the streets. Most of the time, these alligators can be an example of Never Smile at a Crocodile. They are sometimes said to be albinos, like many real cave-dwelling creatures, due to living in a mostly lightless environment (even though cave-dwelling albino creatures are that way in real life due to having evolved to be that way over countless generations). Many fictional works make alligators grow to gigantic proportions or become indestructible killing machines from all the chemicals (often growth and/or rage inducing) found in sewers.

Of course, this trope is entirely fictional and unrealistic. Not only because it relies on Absurdly-Spacious Sewer, itself a fictional and unrealistic trope, but also because there's just plain nothing to eat in a sewer, alligators (and crocodilians in general) need to bask in the sun in order to properly digest their food or else it will rot in their stomachs, and because such a creature would spend every waking moment immersed in human excrement, which would obviously be about as healthy as sharing an apartment with a Plaguemaster.

The alligator-in-the-sewer thing is probably one of the oldest Urban Legends New York has.

The party runs into a giant alligator in the sewers beneath Water Town.

The party runs into a giant alligator in the sewers beneath Water Town.