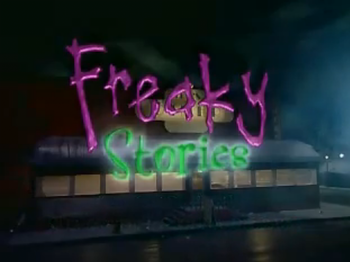 Freaky Stories is a Canadian Animated Anthology series created by Decode Entertainment (now part of WildBrain) and Funbag Animation. The show is hosted by two animatronic puppets, a cockroach named Larry de Bug (voice of James Rankin), and his gooey sidekick, Maurice the maggot (voice of Dan Redican), the two of whom hang out at Ted's Diner - a 1940s-style Greasy Spoon staffed by a waitress named Rosie who is heard but never seen (voice of Jayne Eastwood).

Officially described as "a Twilight Zone for kids", the series centers around Urban Legends, specifically the kinds that are told as scary campfire or bedtime stories. Every episode would start Larry telling the audience, "This is a true story, and it happened to friend of a friend of mine," and also end with Larry saying, "Just because they never happened doesn't mean they ain't true." But what made the series truly stand out however was that as an anthology series, the animation style and musical scoring of each half-hour episode varied between each of the stories being told. Furthermore, different narrators were brought on board with every story, with a wide variety of Canadian actors and voice artists appearing in the series to tell Larry and Maurice's myths and legends.

As the brainchild of Steve Schnier, the pilot to Freaky Stories debuted in English-speaking Canada as part of YTV's "Dark Night 3" Halloween block on October 28, 1995. Due to the positive reception it received, the full series was greenlit shortly afterwards and premiered as a one-hour special as part of "Dark Night 5" on October 24, 1997. The show proceeded to run for 35 episodes over 3 seasons (with each episode featuring 4 shorts for a total of 140 stories), with the final episode being shown on October 1, 2000. Outside of Canada, the show aired on Fox Family in the United States.