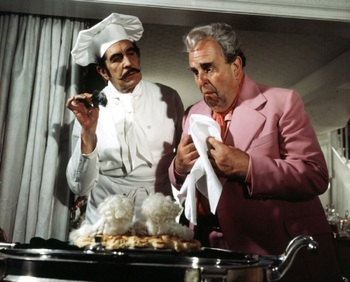 That horrible moment when "I Ate WHAT?!" becomes "I Ate WHO?!"
"Don't you even know about America?" I asked.
"Not really," she answered. "Although I have heard it said that over there the witches are able to make the grown-ups eat their own children." [...]
"But how could they possibly make them eat their own children?" I asked.
"By turning them into hot-dogs," she said. "That wouldn't be too difficult for a clever witch."
— The Witches
Advertisement:

You have bent your enemy to your will. As a show of obedience, he is now hosting you at a lavish feast in your honor. Only too late do you begin to wonder where your son is, and what exactly what is in the stew...

A Sub-Trope of I Ate WHAT?! and I'm a Humanitarian, and usually also Revenge Is a Dish Best Served.