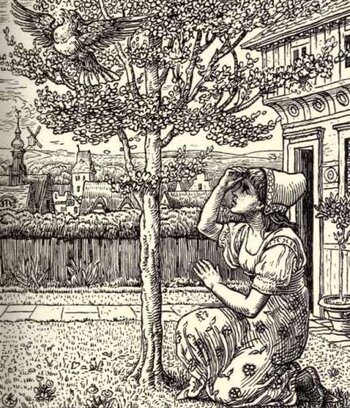 'It was my mother who butchered me,
It was my father who ate me,
My sister, little Marleen,
Found all my little bones,
Bound them in a silken cloth,
And laid them under the juniper tree.
Peewit, peewit, what a beautiful bird am I!'
Advertisement:

The Juniper Tree (German: Von dem Machandelboom) is a Fairy Tale collected by the Brothers Grimm. It is the forty-seventh story anthologized in Kinder und Hausmärchen, or Children's and Household Tales, their landmark collection of German folklore first published in 1812. It is one of the most violent stories in the entire collection.

2000 years ago, there lived a rich man and his beautiful wife. Though they loved each other dearly, they longed for a child. One winter day under the juniper tree, the woman cuts her finger and wishes for a child as red as the blood and white as the snow. Sure enough, she soon discovers she is pregnant, and gives birth to a beautiful baby boy. Tragically, she dies in childbirth.

Following his wife's request, the man buries her beneath the juniper tree. Years later, her remarries and has a daughter by his second wife. The second wife loves her own child, Marlene, but despises and abuses her stepson.

One fateful day, the stepmother lures the boy into an empty room on the pretense of giving him an apple for an afternoon snack, where she beheads him. At first she is horrified by her actions and tries to tie the head back onto the body. But when Marlene tries to talk to her half-brother and sees the head fall off, the wicked mother convinces Marlene that she is responsible for the boy's death.

The mother makes a stew from the boy's remains, salted with Marlene's tears. Convincing the father that his son went to visit his extended family, she feeds him the stew, which he greedily devours.

In secret, Marlene wraps her half-brother's bones in her best scarf and lays them to rest beneath the juniper tree, and something miraculous happens. Mist surrounds the tree, the bones and cloth vanish, and a beautiful bird flies out.

The bird flies around town, singing this tune:

My mother, she killed me,
My father, he ate me,
My sister Marlene,
Gathered all my bones,
Tied them in a silken scarf,
Laid them beneath the juniper tree,
Tweet, tweet, what a beautiful bird am I.

The goldsmith, the shoemaker, and the millers all find the song so lovely that they offer payment to hear him sing it again: a gold chain, a pair of red shoes, and the millstone. With these objects, he returns to the house, where he performs his song for his awestruck father, terrified stepmother, and grieving sister. He gives the golden chain to his father, the new red shoes to his sister, and throws the millstone on the stepmother, crushing her to death.

Then the bird is engulfed in smoke and flames, and when it dissipates, the bird is a living human boy again. The children and their father reunite and live happily ever after.

In the Aarne-Thompson-Uther index, this is tale type 720: "Mother Killed Me, Father Ate Me". Another tale of this type is "The Rose Tree", collected by Joseph Jacobs. D. L. Ashliman's translation, along with other tales of this type, can be found on his site here

. SurLaLune also has a translation that hew closer to the original German (calling the sister by her German name, Marlinchen), which can be read here

Due to its violent subject matter, the tale is rarely adapted or retold for children, but they do exist. These include the 1985 novel The Juniper Tree by Barbara Carr, a 1985 opera

, and a 1990 film from Iceland (which featured the musician Björk in her debut role).

"The Juniper Tree" contains examples of: