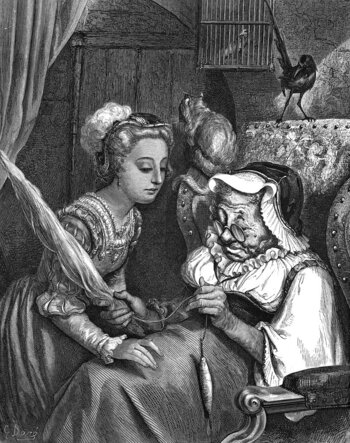 The princess, the old woman and the splinter of flax. Illustration by Gustave Doré
Advertisement:

Sun, Moon, and Talia, also known more formally as Il Pentamerone, Day 5, Tale 5 (from 1636), is the tale which is thought to have influenced Perrault's "Sleeping Beauty".

On the birth of his daughter Talia, a king asked all the wise men and seers to tell her future. They concluded that she would be exposed to great danger from a splinter of flax. To prevent any such accident, the king ordered that no flax or hemp should ever come into his castle. But one day when Talia had grown up, she saw an old woman who was spinning pass by her window. Talia—who had never seen anything like it before—"was therefore delighted with the dancing of the spindle." Made curious, she took the distaff in her hand and began to draw out the thread. A splinter of hemp "got under her fingernail and she immediately fell dead upon the ground." The king left his lifeless daughter seated on a velvet chair in the palace, locked the door, and departed forever, to obliterate the memory of his sorrow.

Some time after, another king was hunting. His falcon flew into a window of the empty castle and did not return. The king, trying to find the falcon, wandered in the castle. There he found Talia as if asleep, but nothing would rouse her. Falling in love with her beauty, one would think he kissed her at this point, but rather, he raped her. Then he left and forgot the whole affair. Nine months later Talia gave birth to two children, all the time still in a magical coma. They nursed from her breast. Once when one of the babies wanted to suck, it could not find the breast, but got into its mouth instead the finger that had been pricked. This the baby sucked so hard that it drew out the splinter, and Talia was roused as if from deep sleep to find that she'd been raped and was now a mother of two (one can imagine she had a lot of questions at this point).

One day the king remembered his adventure and went to see Talia again, presumably to rape her again. He found her awake, and confessing he was the father of her children, they went off to have a weekend long sex marathon in the hay, even though she didn't know his ass from Adam. Then he brought her and the rugrats to his castle, but was careful to keep them hidden from his wife. (Oh, did we forget to mention he was already married? What a charmer.) The king's wife found out his secret, and on the sly sent for the two children in the king's name. She ordered them cooked and served to her husband. The cook hid the children in his own home and prepared some goat kids instead, which the queen served to the king. A while later the queen sent for Talia and planned to have her thrown into the fire because she was the reason for the king's infidelity. At the last minute the king arrived, had his wife thrown into the fire, married Talia, and was happy to find his children, whom the cook had saved.

An unexpurgated translation can be read here

For what this tale mutated into, see "Sleeping Beauty". Also compare to "The Brown Bear of the Green Glen".