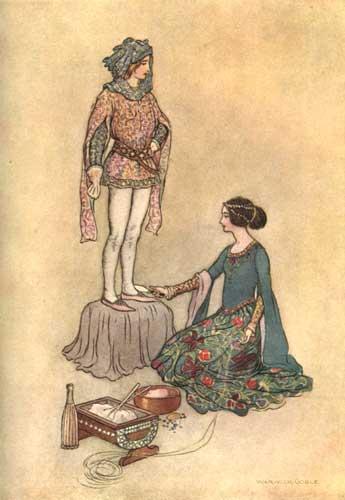 Image from "Stories from the Pentamerone", the 1911 English Macmillan & Co. publication.
Advertisement:

Pintosmalto is an Italian Fairy Tale written by Giambattista Basile in Il Pentamerone, which was published in 1634. Although it is a literary fairy tale, folk variants are found in many Mediterranean countries.

A merchant's daughter named Betta builds herself a groom from half a hundredweight of Palermo sugar, as much again of sweet almonds, four to six bottles of scented water, a little musk and amber, as well as forty pearls, two sapphires, a few garnets and rubies, and some gold thread. Her sole tools are a trough and a silver trowel. When the marzipan statue is done, she prays to the Goddess of Love until he comes to life.

Betta names him Pintosmalto and they arrange to marry at once. But a queen who attends the wedding feast abducts him, and Betta, disguised as a beggar, sets out to get her husband back. She happens on an old woman who takes pity on her and teaches her three spells that should help her. After more journeying, Betta finds Pintosmalto, but the queen won't let her near and he doesn't recognize her.

Undeterred, she tries the first spell and an automotive golden coach appears. With it, she bribes the queen to let her sleep the night at the door of Pintosmalto's room. The queen agrees but drugs Pintosmalto, so that Betta cannot speak to him. She tries again with the next spell and a golden bird that sings like a nightingale appears. It is as before but a cobbler informs Pintosmalto of all the weeping he had heard, and the next night, when Betta bribes her way in with an assortment of fineries, he is awake. They instantly flee, taking with them what the queen was bribed with plus a little extra for the trouble she caused them.

The fairy tale takes inspiration from the myth of Pygmalion and Galatea, as when Betta prays to the Goddess of Love, she explicitly mentions that the goddess did the same favor for a "King of Cyprus". The unique choice for a statue of marzipannote It's never actually said Pintosmalto is made from marzipan, but it follows from the ingredients used. is not a coincidence either. Italy has a very old tradition in the making of wax statues for purposes ranging from art to religion to science. Marzipan is not wax, but has a similar capacity to be molded and colored into something indistinguishable from the real thing. And in 1634 marzipan was expensive, mostly due to the sugar, which was known as "white gold" at the time. Prior to the 1500s, sugar was for the rich only. Colonization and slavery made it increasingly more accessible and starting the 1600s it was available to the bourgeoisie, which used fancy marzipan creations to impress one another.

. It is an unusual example of Aarne-Thompson type 425, the search for the lost husband, a type of which there are many variants

. Compare "The Feather of Finist the Falcon" and "East of the Sun and West of the Moon", and for the Gender Flip "Soria Moria Castle" and "The Blue Mountains" not to mention Weird Science.