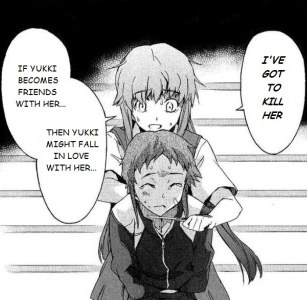 Don't try befriending Yukki.
"As I told Lady Freeze when I pulled her plug, this is a one-woman show."
— Poison Ivy, Batman & Robin
Advertisement:

It can get particularly twisted when some sides of the triangle are completely one-sided. Bob is in love with Alice, but Alice not only fails to realize it but is already in a relationship with Chris. This is a classic recipe for drama (or humor) but sometimes, it goes too far.

Sometimes, somehow, Bob gets the idea that Chris is the one in the way of Bob's happiness with Alice, and if Chris were to somehow have an "accident", then surely Alice would come to love Bob instead. It's true — Love Makes You Evil and these characters are really Not Good with Rejection.

Not always the best thought-out plan, no. Sometimes, Bob may not even consider what would happen if Alice ever found out. In fact, in a lot of these situations, Bob doesn't even make any effort to hide his actions from her and seems to be convinced that she'll somehow fall in love with him as soon as he kills Chris.

If this isn't The Reveal for a Yandere, it's still very likely to be their most shocking moment.

Compare Opposites Attract Revenge and Comforting the Widow. This can overlap with Death by Woman Scorned if the hypotenuse in question is actually interfering with a relationship. Contrast I Want My Beloved to Be Happy, which may be subverted into this trope, and vice versa. Also compare the Scarpia Ultimatum, where the threat to murder the hypotenuse may or may not be carried out. Contrast If I Can't Have You…, for when it's the Cathetus (Alice, for those a little rusty on their geometry) who will be murdered. If this is done indirectly by setting the hypotenuse up to be killed, it's either an Uriah Gambit (if Bob does it intentionally) or Death of the Hypotenuse (if the intent is limited to the author). Extreme Sub-Trope of Removing the Rival.

When the official authors do this, it's Death of the Hypotenuse. When the fanfiction writers do this, it's Die for Our Ship. If the hypotenuse is a friend, it's Friend Versus Lover. If the character kills him/herself instead, it's Spurned into Suicide.

Note that the triangle must be a right triangle for this to apply. If it is an equilateral triangle, Polyamory occurs, though if you have a Psychotic Love Triangle going on, things may still not end well. And of course, this isn't meaning literally murdering the hypotenuse.