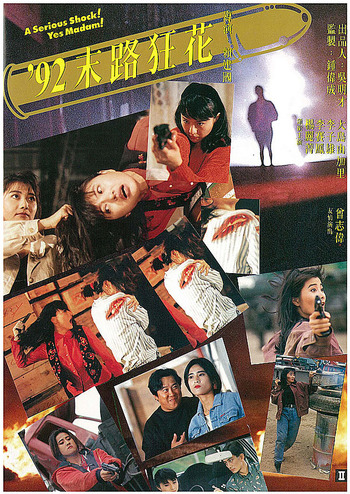 Yukari Oshi-mom will tear a new hole in anyone who's threatening her child.

A Serious Shock! Yes Madam!, also known as Death Triangle is a 1992 action film starring Cynthia Khan, Yukari Oshima, Moon Lee and Waise Lee. One of many female-led action movies from early 90s Hong Kong, the movie surprisingly takes on a more dramatic turn, being more character-focused than the norm of these kind of movies being action-driven.

Inspector Yang (Cynthia Khan) and Inspector May (Lee) are partners and best buddies in the police force, but both of them had a crush on the same man, Wilson (Lawrence Ng). Despite Wilson eventually settling with Yang and the two of them becoming engaged, May is unwilling to let Wilson go, where she tries convincing him to cheat on Yang, but when Wilson remains loyal, May - driven by envy - decides to go on a self-destructive rampage and turn on her closest friend.

Along the way, there is a sub-plot involving Coco (Oshima), a former car thief-turned-mechanic, who used to be part of a triad and was once arrested by Yang, but have since attempted to turn straight after giving birth to her son. When May's treachery is revealed, Yang had to unexpectedly turn to Coco for assistance.

Despite the title, the movie has nothing to do with the Hong Kong Action Girl classic, Yes, Madam. It was supposed to be a sequel of sorts, but the idea was scrapped in the last minute - nevertheless, for some baffling reason the studios decide to keep its name as it is.