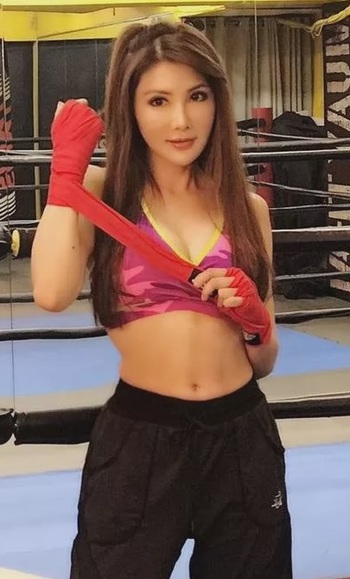 She can kick your ass in the four seconds you spend gazing at her navel.
Advertisement:

A trained dancer at age 17 and a black belt taekwondo expert, Cynthia was spotted by the Hong Kong production company, D & B Films Co. who's at its peak of producing films and is actively seeking young, talented stars with potential. Then a fresh face in the film industry, Yang Li-tsing earns her new celebrity name, Cynthia Khan, which is a Portmanteau of the studios' two other leading ladies, Michelle Yeoh (then billed as Michelle Khan) and Cynthia Rothrock.

Ever since her debut, Khan has starred in over 50 films, most of which are action movies from the 1990s.