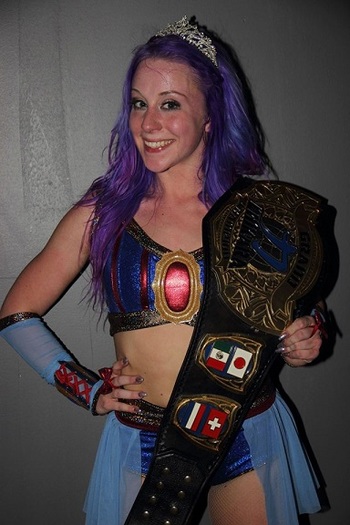 Kimberly Frankele (born June 27, 1990) is an American professional wrestler and ballet teacher from Seattle known for her work for WSU, CZW, SHIMMER and numerous other promotions as Kimber Lee and in CHIKARA as Princess Kimberlee. She debuted in 2011 after training under Drew Gulak at the CZW Academy. Her greatest achievement came in 2015. That year, CHIKARA broke up the bulk of the roster into ten teams for the Challenge of the Immortals, a 90-match double-round-robin tournament. She was named a captain and drafted Los Ice Creams and Jervis Cottonbelly, with her team being named Crown And Court. They defeated The Wrecking Crew (Max Smashmaster, Blaster McMassive, Flex Rumblecrunch and Jaka), meaning each member of the team had the three points needed to challenge for either the CHIKARA Grand Championship or the CHIKARA Campeonatos de Parejas

Hallowicked successfully defending the title against the two former Champions, Eddie Kingston and Icarus. Kimberlee ran to the ring and cashed in her title shot and defeated Hallowicked for the title in under three minutes, becoming the fourth Grand Champion and the first female Grand Champion. She held the title for five months.

Along with the above, she and Cherry Bomb are former SHIMMER

, and she also won the Shine tag titles with Stormie Lee. Kimber is a former AAW Women's Champion

with The Whisper, was the inaugural Legacy Wrestling Women's Champion

"These Tropes Save Themselves, Thank You!":