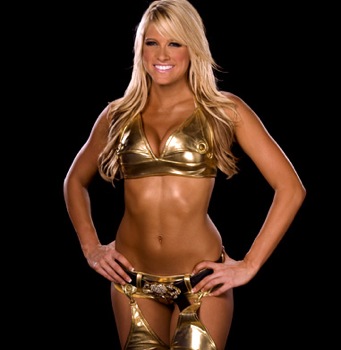 Barbara Jean "Barbie" Blank (born on January 15, 1987 in Jacksonville, Florida) is a female American professional wrestler, best known as Kelly Kelly who has competed exclusively in WWE on all three brands, first on the WWE revival of ECW, then WWE Raw, then WWE Smackdown and was most recently on Raw in August 2012. She was signed in 2006 and was introduced first in a weekly striptease segment called "Kelly's Expose" and then formed "Extreme Expose" with Brooke Adams and Layla El, beginning a weekly dance segment on ECW. After the group split, Kelly began to take a more active role in the ring and was featured in more matches. Her hard work paid off on June 20, 2011 when she became the Divas Champion for the first (and only) time, reigning until October 2, 2011. She left WWE in late 2012 and has not continued with wrestling since.

since 2015. Few years ago, Kelly said in some interviews she wants to come back to wrestling, and in part that resulted, being WWE ambassador since February 2017. She was also among several returning female wrestlers who made an appearance in the first Women's Royal Rumble in 2018, entering at #19.

Tropes so nice, they named them twice: