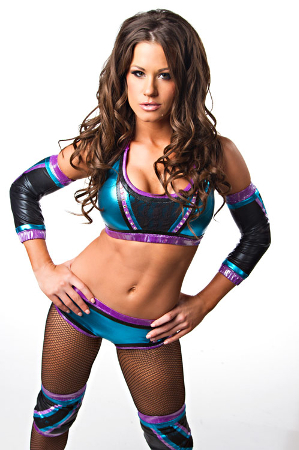 "Don't mess with Tess, baby!"
Brooke Nichole Adams (born December 4, 1984) is an American model and professional wrestler best known for her time in TNA under the names Brooke or Brooke/Miss Tessmacher. A former Miss Hawaiian Tropic winner, she previously worked for WWE from 2006-2007 as a member of the Extreme Exposé dance troupe with Kelly Kelly and Layla. She is a former two-time TNA Knockouts Champion and one-time Knockouts Tag Team Champion with Tara.
Advertisement:

She also appeared on the 25th season of The Amazing Race in 2014 along with her then-boyfriend, Robbie E, a fellow TNA wrestler.

Not to be confused with the actress of the same name.