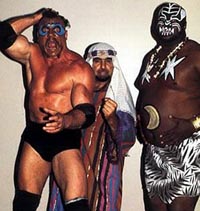 Akbar, with the Missing Link and Kamala
Advertisement:

Jimmy Saied Wehba (September 29, 1934 – August 19, 2010) was an American Professional Wrestler and manager from Vernon, TX as General Skandor Akbar. He started his career under his own name in 1963 before changing it upon the suggestion of Fritz Von Erich. He competed in various National Wrestling Alliance territories, the WWWF and Australia before finding his niche as a manager. He was best known for his work in Texas and in the Mid-South/UWF. He passed away from prostate cancer in 2010 at the age of 76. He was a 1x NWA Georgia Tag Team Champion

. He was inducted into the Texas Wrestling Hall of Fame in 2011.