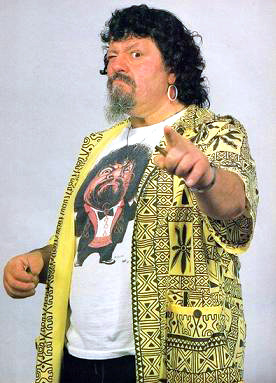 best known for his appearances as "Captain" Lou Albano.

The Wise Men of the East (sometimes billed as the "Triumvirate of Terror") managed the heels in Vince McMahon Sr.'s WWF. The Grand Wizard would manage up-and-comers, guys who could talk and finish the promo after he set it up. "Classy" Freddie Blassie got more heat than the Wizard because he managed turncoats and categorically-evil foreigners, like the Bolsheviks and Iron Sheik. He would cut most if not all of the promos for them. Albano was arguably the best of the three. He managed a lot of Islanders, so he would cut 100% of every promo. He also managed a lot of tag team champions. Hell, Afa and Sika got Title matches in Madison Square Garden against Bob Backlund because Albano was that over as a heel.

Basically, WrestleMania would never have happened were it not for Rock n' Wrestling Connection. We can thank Lou Albano and Cyndi Lauper hitting it off creatively and bringing media attention WWF's way.

Outside of the wrestling world, he is best-known for playing Mario (both in live-action and animated segments) on The Super Mario Bros. Super Show! in 1989, holding the distinction of being the first actor for Mario to achieve widespread popularitynote Mario had been played in both live-action and voiceover roles by a number of actors in both the US and Japan since 1983, but none of them became as iconic as Captain Lou did and consequently setting a precedent for the role that would remain in place until 1996, when Super Mario 64 popularized Charles Martinet's rendition of the characternote Martinet was cast in 1990 and had been officially voicing Mario since 1992, but had only made niche appearances in the role prior to Super Mario 64. He also appeared as Lauper's fictional father in the "Girls Just Wanna Have Fun" video.

He was inducted into the WWE Hall of Fame in 1996.

"Until next time everybody, Do The Mario!!"