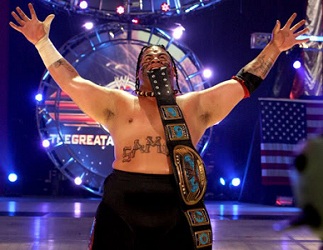 Umaga and his chew toy.

"Years ago someone told Polynesian DNA that everyone was surrounded by sea monsters and it believed them. It made humans that were immune to head injuries, fast enough to run on the highway, and big enough to use the carpool lane. Putting two of them in the same ring is like telling your local tectonic plates to fuck themselves."
— Seanbaby, The 10 Most Insane Acts of Violence in Kickboxing History

You probably don't need to be told this (what with all the Foreign Wrestling Heels running around), but Professional Wrestling isn't very culturally sensitive. Nowhere is this more evident than the Wild Samoan gimmick (or Tongan, or Fijian, or Marquesan, or...). Basically, in the wrestling world, if you come from a small South Pacific island, you talk in grunts, groans, and gibberish, you devour raw fish on the way to the ring (not prepared raw fish like sushi either, just plain, whole, raw fish)... and you destroy everything in your path in the most brutal manner possible. Oh, and your head is hard enough to break concrete. Most fans know literally nothing about Samoa other than the absurd amounts of wrestlers (and absurd amounts of NFL players) who just seem to appear out of thin air. We have seen no proof that the entire island isn't just one very large wrestling school.

Fortunately, this is on its way to becoming a Discredited Trope, with the broadening gimmicks for islander wrestlers such as Samoa Joe, the badass submission expert - Rosey, the erstwhile sidekick to wrestling Superhero The Hurricane - Rikishi, the hip-hop dancing sumo wrestler who rubs his gargantuan, thong-covered ass into his opponents' faces (...yes, you read that right) - Evie, the kicking kiwi - Roman Reigns, the cerebral technician who takes advantage of wolfpack tactics to overwhelm his foes - Jey Dewhurst, the Drag Queen diva - and not least of all The Rock would count as well (his mother was Samoan, but his father was black). However, it does have a way of cropping back up from time to time.

This kind of gimmick tends to come with a very specific moveset which perpetuates over time and it's often adopted by non-Samoan wrestlers. Moves like savate kicks, hip attacks, headbutts, diving splashes, reverse piledrivers, nerve holds/thrusts and the ubiquitous Samoan drop are the most common.