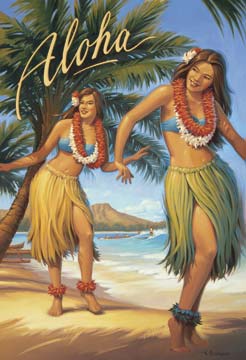 Aloha! If the cast goes to Hawaiʻi for a Vacation Episode, there will inevitably be a hula show and a luau.

Other elements of Hollywood Hawaii involve:

Visiting Hawaii or another tropical island is always a good excuse for a Beach Episode.

Usually doesn't apply to series set primarily in Hawaii, such as Magnum, P.I. or Hawaii Five-O, as the location is simply local flavor.