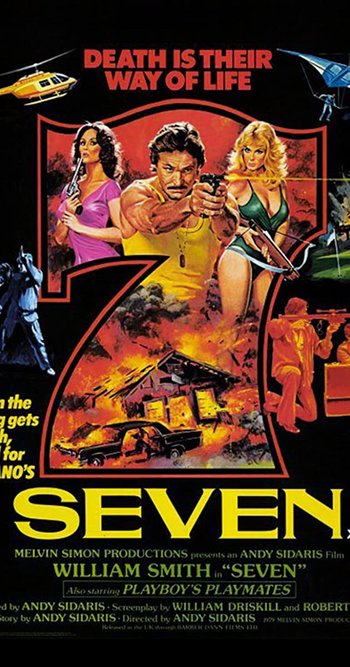 In sun-drenched Hawaii, a dynamic criminal organisation run by seven ruthless professional kingpins intends to liquidate its political leaders, and when they fulfill their plans, take over the 50th State and pillage the land. Although this may be true, the government will soon retaliate by summoning the unconventional special agent Drew Sevano, who, in turn, assembles an invincible and well-equipped army of six other deadly agents; all assigned their target of choice. But things are looking bleak and the mandatory half-hour time frame for the completion of the operation is already tight. Will Sevano's Seven succeed?

Perhaps best known today for being the first instance of the 'shoot the swordsman' gag that would later be made famous by Raiders of the Lost Ark.

Not to be confused with the the 1995 serial killer film, or any other movie titled Seven.

Tropes in Seven include: