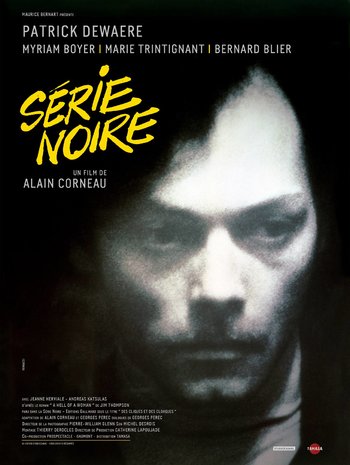 Série noire is a 1979 French crime film directed and written by Alain Corneau and co-written by Georges Perec. It adapts the novel A Hell of a Woman by Jim Thompson.

Franck Poupart (Patrick Dewaere) is a door-to-door salesman. His wife Jeanne (Myriam Boyer) leaves him after he knocks her into a bathtub filled with water after she refuses to make him dinner following one more rant about their dire situation. Then he gets imprisoned for embezzlement after being denounced to the police by his boss Staplin (Bernard Blier). Mona (Marie Trintignant), an underage prostitute, bails him out and persuades him to rob her rich aunt (Jeanne Herviale). Poupart kills the aunt, and then murders his accomplice to frame him for the crime.

However, his streak of bad luck ("série noire" in French) continues, for his wife returns, unannounced and pregnant, and suspects him of murder. He murders her, and then his boss robs him of his booty, leaving him alone and broke with the besotted Mona.